Part of the 2020 game jam by the bpb about climate change.

* WASD/Arrow Keys to move
* Space to put out the fire
* There are 2 levels at his point.

Idea:
Climate change is here and in full effect. We must act now. But governments and the big industry corporations aren't doing enough, act too slow or not thinking their counter measures through. We tried to transfer this into a game in which your house is burning and you have to put it out the seats of fire. You have to plan your moves carefully but at the same time, standing still is not an option as existing fires will double if you wait too long.

Sad I missed the jam.  Nice work.  Not perfect, but it's a jam game, so I give this game the rating of "adequate".

Thanks for your comment! What would have made this game better than adequate for you? :)

Good question.  Well, I've replayed the game a few times now, and thought about it for a while to try to hunt down my deeper thoughts on this, but the problems with this game are still a bit arcane for my mind, so I'm just going to run my mouth (keyboard) and see if something profound and helpful pops up.

So right off the bat this game hints at a pair of closely linked themes.  Climate change and the "This is fine" meme.  Now, climate change is a complicated theme, but the basics are something along the line of:

1.  Humanity faces a problem that, if not dealt with, could seriously hurt it.

2.  Not everyone wants to deal with the problem because they don't want to make the necessary changes required to deal with it.  (This is the part most closely linked with the "This is fine" meme)

3.  The sooner it's dealt with, the easier it will be to deal with.  Conversely, as we leave the problem, it gets harder to deal with.

"This is fine", on the other hand, is pretty simple.  Someone is in a bad situation, and is rationalizing it by convincing themselves that they are okay with the fire raging around them.  (Though with actual climate change, many have rationalized it instead by convincing themselves that the fire doesn't exist, the fire, in this case, being a metaphor for climate change).

So how does this translate to the game mechanics?  Well, the player's in game avatar is in the middle of a house catching on fire.  The fire gets worse (point 1) and the sooner it's dealt with the better (point 3).  The problem comes with point 2.  There's literally no reason why anyone playing this game wouldn't just quickly put out the fires and win.  There's no sense of "This is fine", either from the player avatar, or anyone/anything that the player avatar must face.  This isn't fine, and the player does something about it.  It's how humanity should probably deal with climate change in reality, but if it were reality, then we wouldn't have a "This is fine" meme in the first place.

So really, the ideal mechanic will have some way to psychologically motivate the player to wait before enacting a solution, with the actual solution being to ignore that motive, and just go for it.  That way it correlates to the thing it's supposed to be an allegory for.

But thinking on it, I have no idea how you'd add in something like that mechanically.  So here I am, worrying that my criticism won't end up being too constructive.  Sorry about this.  I put a lot of thought into it, but I'm not sure I've been very helpful. :(

Wow thank you for your extensive and detailed comment! Funny thing is: we did think about the issue and came up with a simplistic mechanic but didnt have the time to implement it as we were only a 2 person team and only one of use was programmer. Our idea was to implement a score  counter and as long as you stand still and do nothing the score goes up quickly. But when you move around and put out fires your score meter stops or slows down significantly. So if you don't move at all you will lose the game at some point and if you continueously move around you won't get any points.

Brilliant!  Points are a completely made up and pointless metric that will nonetheless motivate players to take bad moves.  They're the perfect metaphor for the motivations to not deal with climate change.

I understand, of course, that it's hard to put in everything you want to in a jam.  I certainly didn't in mine, and the motivation to upgrade it dropped off exponentially afterwards, so you'll face no judgement from me on cutting content.  That said, you've essentially identified the answer to your own question.  "What would have made this game better than adequate for you?" -> "A meaningless score counter".  It completes the metaphor.

Anyhow, good luck in your future endeavors.  I'll certainly be interested in anything more you post to the site.

Thanks! I hope we can update the project soon! 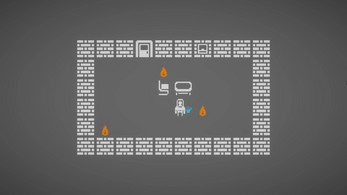 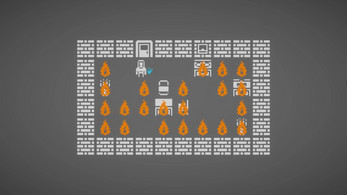