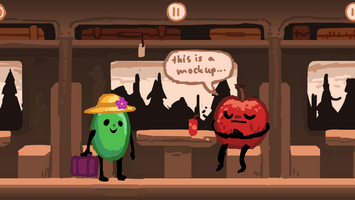 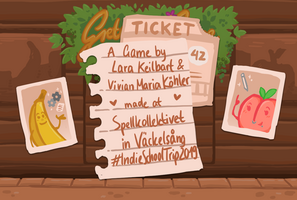 One week after the end of the indie school trip and its game jam and Greta gets the first content update! Here's what's new:

Speech sounds: I finally managed to cut and edit all the sounds Viv had already recorded during the jam. Back then I didn't have enough time to to all that but it's in the game. We decided to go with Nintendo-like babbling speech sound, because a) we love games like Stardew Valley and b) think it's cute. I hope you enjoy the sounds!

New character dialog: I wrote two completely new dialog options for Steven the sad Strawberry, the first fruit you encounter in the second carriage. I tried to add some more depth to the game, which is hard, because it's really just a short thing. Since I have been struggling with depression for most of my life it's something I think we need to talk about. Greta is mostly a lighthearted game so I didn't want to make it too dark at this point. I hope it turned out okay.

Bug fixing: I fixed some smaller bugs, like the cursors, which are now only the two you need. I couldn't figure out why clicking on the start button at the beginning didn't work with the arrow-walk cursor so I did a work around with the hover over. Hope that works for most people. When you hover over the characters you can now see their names (however only their first names, I have to figure out how to display the full names) There's still a few things that I couldn't fix, like why the idle animations aren't playing.

The next content update will bring you dialogs for the three other fruit in the second carriage: Heather Honeymelon, Winnie Watermelon and Wally Wolfberry! I will also research if AGS can put out the game for mac users.

Please comment below or on the main page if you encounter any problems or bugs or let me know any thoughts you have on the game!

Get Greta The Grape

Narrative Adventure about finding your seat in a train.